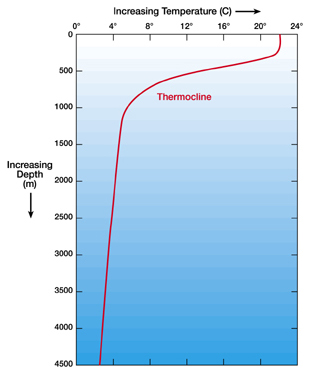 This is a simple temperature-depth ocean water profile. You can see temperature decreases with increasing depth. The thermocline are layers of water where the temperature changes rapidly with depth. This temperature-depth profile is what you might expect to find in low to middle latitudes.
Click on image for full size
Windows to the Universe original image

Make Your Own Thermometer

90 % of the total volume of ocean is found below the thermocline in the deep ocean. The deep ocean is not well mixed. The deep ocean is made up of horizontal layers of equal density. Much of this deep ocean water is between 0-3 degrees Celsius (32-37.5 degrees Fahrenheit)! It's really, really cold down there!

There is a neat program that is measuring the temperature and salinity of ocean surface waters around the world.  The Argo program deploys floats that measure salinity and temperature throughout the surface layer of the ocean. Over 3,000 free-drifting floats have been deployed all over the ocean and each float is programmed to sink 2,000 meters down, drifting at that depth for about 10 days. The float then makes its way to the surface measuring temperature and salinity the whole time. Data is transmitted to a satellite once the float reaches the surface, so that scientists and the public have access to the state of the ocean within hours of the data collection. At a greater depth in the water, measurements are often made with a CTD instrument (CTD = conductivity, temperature, depth), where the instrument is placed in the ocean water from a ship or a platform. These instruments are used by the Bermuda Institute of Ocean Sciences (BIOS), where they have been tracking ocean measurements like temperature, salinity and oxygen concentrations for over 55 years.

The Argos and BIOS program have both published results that confirm that the ocean is warming. Surface water temperatures obviously change from season to season and year to year, but the whole ocean has warmed about 0.1 degree Fahrenheit (0.055 degree Celsius) in the past 30-50 years. This may not seem like much of a temperature change, but it is significant. Think about a pot of water heating on a stove. A small pot of water will heat quickly, while a large pot of water at the same heat setting will heat very slowly. This is due to a difference in heat capacity. The ocean has an enormous heat capacity because of its large size.  So it is like an enormous pot of water, and it takes a great amount of heat to warm the ocean. The fact that the ocean has warmed significantly in 30 to 50 years is remarkable and concerning.

The coast of Bangladesh is home to millions of people, however rising sea level caused by global warming is expected to change that. This South Asian country is one of many low coastal areas worldwide...more

This page describes environments that are very hot or very cold, extremely dry, or both. Extreme environments are places where "normal" life finds it hard to survive. That doesn't mean that there isn't...more