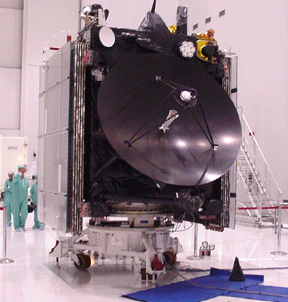 The Rosetta Mission, the first mission to have a lander which will touch down on a comet, was suppose to launch in January 2003. Unfortunately, launch had to be delayed. The good news is that Rosetta has a new launch date, February 26, 2004.

Rosetta will not rendezvous with comet Wirtanen as was originally planned, but comet 67P/Churyumov-Gerasimenko. (abbreviated as comet C-G)

After launch, the spacecraft will then begin on a ten year journey to rendezvous with comet C-G. Part of the ten years will include Rosetta getting on the correct orbital path, which includes gravity assists from Earth and Mars. Rosetta will study this comet in detail, in hopes that this will lead to new scientific findings about all comets and thus about the formation of our solar system.

The Rosetta spacecraft is actually made of two parts: an orbiter, which will approach the comet and then circle it, and a lander. Rosetta has many complex scientific instruments that will aid in researching this comet's nucleus, coma and tail.

The Rosetta spacecraft is named after the Rosetta stone, a famous stone that allowed hieroglyphics to finally be deciphered.

Many scientists from different nations have contributed to the Rosetta mission. Mission operations are being overseen by the European Space Agency.

The Rosetta spacecraft has many instruments that it will use to measure various aspects of Comet Churyumov-Gerasimenko during its visit. This diagram shows the two cameras that make up the OSIRIS imaging...more

The Rosetta lander has many instruments that it will use to make measurements when it lands on Comet Churyumov-Gerasimenko. The instruments carried by the lander are described in detail in the table below....more

The Rosetta Mission, the first mission to have a lander which will touch down on a comet, was suppose to launch in January 2003. Unfortunately, launch has been delayed and no new launch date has been set....more