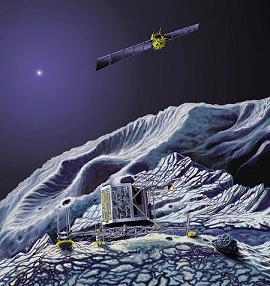 This is what an artist thinks the Rosetta lander will look like on the comet's surface.
Click on image for full size
Courtesy of ESA

Part of the Rosetta spacecraft is a lander that will touch down on the surface of the comet. Since the comet is much smaller than a planet or even a moon, the gravity on the surface is very weak. The engineers who designed the Rosetta lander had to make sure it doesn't bounce (and maybe tip over!) when it lands. The lander will be moving very slowly, about one meter/second (two miles/hour), when it touches down. It will shoot harpoons into the icy surface of the comet when it lands. Cables from the harpoons will help hold the lander down on the surface.

The Rosetta mission was supposed to study a comet named Wirtanen. There were some problems with the rocket that Rosetta will be launched on, so Rosetta's launch had to be delayed. Because of the delay, the mission will now study a different comet. Rosetta will study Comet Churyumov-Gerasimenko. The lander will touch down on the nucleus of Churyumov-Gerasimenko in November 2014. The new comet is much bigger than the old one, so it has more gravity. That means the Rosetta lander will be going faster when it lands. Engineers had to make some changes to the legs of the lander to make sure it has a soft landing on the surface of Comet Churyumov-Gerasimenko.

Lutetia is a medium-sized asteroid. It orbits the Sun in the main asteroid belt between the planets Mars and Jupiter. Its official name is "21 Lutetia" because it was the 21st asteroid discovered. Lutetia...more

Rosetta is a European space probe. It was launched in 2004. Its main mission is to fly to a comet and land on it. Along the way it has flown by two asteroids. In July 2010 it flew by an asteroid named...more