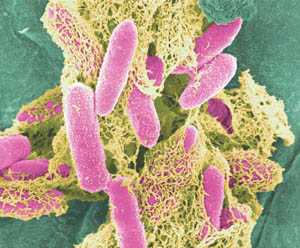 Bacteria and Antibiotics: An Example of Evolution by Natural Selection

Examples of natural selection processes are well documented in life forms that have very rapid life cycles such as bacteria.

Bacteria (domain Eubacteria) are tiny, single-celled prokaryotic organisms. They reproduce quickly so they evolve quickly, even within a few weeks. Although many types of bacteria are helpful to human and animal health, some cause infectious diseases such as strep throat, ear infections, tooth decay, and anthrax. We wash our hands before eating to help ensure that we do not transfer harmful bacteria from our hands to our food, then consume it and become ill.

Natural selection processes in disease-causing bacteria are widely documented. For example, a person who is ill because of disease-causing bacteria can become well when given antibiotic drugs, which destroy the bacteria in the person’s body. Bacteria that once were quelled by a particular type of antibiotic drug become “resistant” to the drug over time. The first time the drug is used, most of the bacteria are killed, but some of them can survive, if they have a gene or genes that allow them to withstand the drug's effects somewhat. The ones that survive are better adapted to deal with that particular type of antibiotic drug. If the survivors are able to reproduce inside the person’s body (for instance, if the patient stops taking antibiotics early), then the next generation of bacteria is better suited to deal with the antibiotic drug as well. If the drug is used again, the bacteria will be more resistant to the drug; more will survive and be able to reproduce and the person remains ill. That’s when a doctor will try a different type of antibiotic. Hopefully the bacteria will not be well adapted to the other drug, will be destroyed, and the person will get well. However, over the last 50 years doctors have had to make antibiotics stronger and stronger to deal with these quickly evolving microbes. Today, strains of bacteria have developed that are resistant to antibiotic drugs, so scientists are always trying to develop more effective medicines.