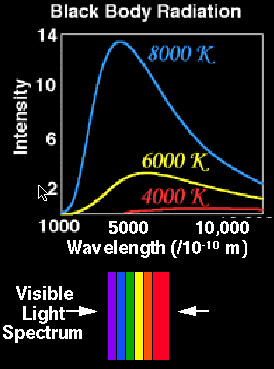 Let's explore three different black bodies. The curves on the left tell us the color and brightness (intensity) of light given off by an equal-sized piece of black bodies with temperatures of (7,727 degrees Celsius). These temperatures are typical of stars.

The hottest black body (8,000 K) produces mostly blue light and a lot more of it than the cooler ones. The height of the curve tells us how much light.

The coolest black body (4,000 K) produces mostly red light. It is so dim compared to the hottest (blue) black body that it hardly shows up on the plot.

How do we use this information ... continue on to find out.

The Kelvin scale is a temperature scale that is often used in astronomy and space science. You are probably more familiar with the Celsius (or Centigrade) scale, which is part of the metric system of measures,...more