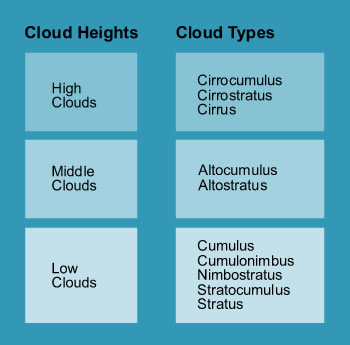 High clouds include cirrus, cirrocumulus, and cirrostratus clouds. These clouds are made up of either ice or water droplets, but they are usually made up of ice crystals. Water clouds tend to have sharp edges, and ice clouds are more wispy.

Cirrus clouds are the most common of the High Cloud (5000-13000m) group. They are composed entirely of ice and consist of long, thin, wispy streamers. They are commonly known as "mare's tails" because...more