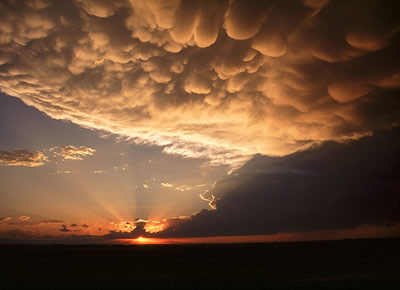 This is a photo of mammatus clouds, taken in Weld County, Colorado.
Click on image for full size
Photo courtesy of Gregory Thompson

Cloud Formation Due to Surface Heating

Mammatus clouds are pouches of clouds that hang underneath the base of a cloud. They are most often associated with cumulonimbus clouds, and they indicate that a storm is particularly strong. These clouds usually form during warm months, and they are formed by descending air in the cloud.

Mammatus clouds have been described as looking like a field of tennis balls or melons, or like female human breasts. In fact, the name "mammatus" comes from the Latin word mamma, or breast, because of this resemblance.