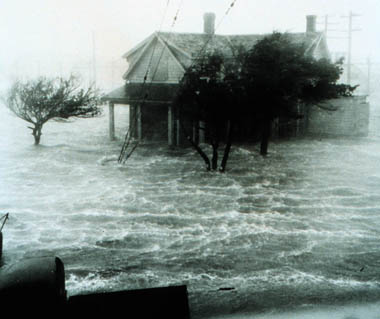 As a hurricane or other tropical storm moves towards a coast, it can cause sea level to rise higher than normal. The sea level rise only lasts a short time, usually just a few hours, but it can cause lots of damage. Towns along the coast may be totally underwater. Huge ocean waves destroy docks, houses, roads, and erode beaches.

Have you ever seen a weather map with a red L on it? This red L means there is a low pressure system over that area of the map. Just what does that mean? It means that that area has lower pressure than...more

Hurricanes are powerful and can cause lots of damage. They can change natural environments. They can also damage the places where people live, work and play. When a hurricane is over the ocean, wind and...more

The official "Hurricane Hunters" are part of the Air Force. They fly into hurricanes to get information. Scientists use this information to make forecasts. What information do they get and why is it important?...more

Different places in the world call tropical cyclones by different names. If you click on the image at left you will see which areas use "cyclone", which use "hurricane", and which use "typhoon" when refering...more