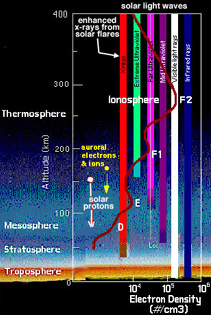 Invisible layers of ions and electrons are found in the Earth's atmosphere. We call this region of atmosphere the ionosphere.

The main source of these layers is the Sun's ultraviolet light which ionizes atoms and molecules in the Earth's upper atmosphere. During this process, electrons are knocked free from molecules or particles in the atmosphere.

Flares and other big events on the Sun produce increased ultraviolet, x-ray and gamma-ray photons that arrive at the Earth just 8 minutes later (other particles from the Sun may arrive days later) and dramatically increase the ionization that happens in the atmosphere. So, the more active the Sun, the thicker the ionosphere!

Solar Dynamics Observatory (SDO) is a satellite which studies the Sun. SDO carries several telescopes and other instruments for observing the Sun. The instruments on SDO take much better pictures than...more