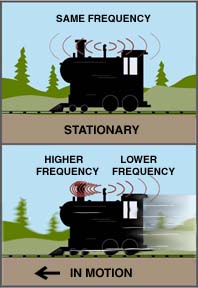 A commonly used example of the Doppler effect is a train. When a train is approaching, the whistle has a higher pitch than normal. You can hear the change in pitch as the train passes. The same is true with sirens on police cars and the engines of race cars.

One way to visualize the Doppler effect is to think of sound waves as pulses emitted at regular intervals. Imagine that each time you take a step, you emit a pulse. Each pulse in front of you would be a step closer than if you were standing still and each pulse behind you would be a step further apart. In other words, the frequency of the pulses in front of you is higher than normal and the frequency of the pulses behind you is lower than normal.

The Doppler effect doesn't just apply to sound. It works with all types of waves, which includes light. Edwin Hubble used the Doppler effect to determine that the universe is expanding. Hubble found that the light from distant galaxies was shifted toward lower frequencies, to the red end of the spectrum. This is known as a red Doppler shift, or a red-shift. If the galaxies were moving toward Hubble, the light would have been blue-shifted.

Edwin Hubble was an American astronomer who lived between 1889-1953. His observations of galaxies helped him develop the idea of an expanding universe, which forms the basis of modern cosmology, the study...more

People understood the concept of radar long before scientists first built a radar system. In the late 1930's all of the countries involved in World War II rushed to create better radar systems to use in...more