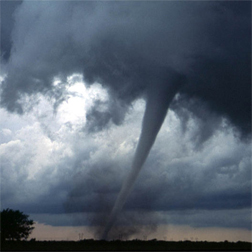 Before 1971, there was no way to categorize tornadoes by their strength. Without a standard system to rank tornadoes, there was no way to keep an accurate storm record; everybody had their own idea of how strong the storm was. In 1971, T. Theodore Fujita, a professor at the University of Chicago, came up with a system that equated wind speed with tornado damage. This original Fujita tornado scale had six categories from F0 to F5. A new scale for rating the strength of tornadoes became operational on February 1, 2007 and it is called the Enhanced Fujita Scale. The Enhanced Fujita Scale or EF Scale has six categories from zero to five, with EF5 being the highest degree of damage. The Scale was used the first time as three separate tornadoes took place in central Florida early on February 2, 2007. These tornadoes destroyed many houses and businesses and killed at least 21 people. And these tornadoes were only rated EF3 tornadoes.

The first time the EF5 measurement was recorded was in the Greensburg, KS tornado that occurred on May 4, 2007. The tornado was estimated to be 1.7 miles in width and traveled for over 22 miles. Its winds reached 205 mph. The city of Greensburg was virtually destroyed and 12 people lost their lives that day. Tornado sirens were sounded in Greensburg twenty minutes before the tornado hit, certainly saving countless lives. Still, much better tornado forecasting is needed to give even earlier warnings.

Tornadoes are very destructive, so it's important to know when one may form so you can take shelter. Forecastors at the National Weather Service are always on the lookout for developing storms. Even though...more

Tornadoes come in three different sizes, each with different characteristics. The three sizes are: weak, strong, and violent. Their size is dependent not only on their physical width but is part of the...more