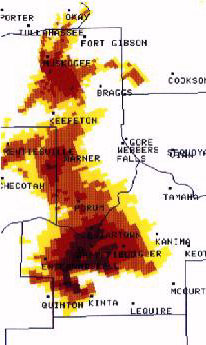 On conventional radar, a hook-shaped echo was the only sign that a tornado might form. Two problems were that not all tornadoes showed up as hook echos and that sometimes tornadoes were on the ground before the hook showed up on radar screens. The hook itself is actually a mesocyclone, a region of rotation and rising air that is free of precipitation. That's why it shows up on radar and being clear. Mesocyclones are what make supercells last so long. They also have been know to cause tornadoes, which is why forecastors would look for this shape on radar.
Image courtesy of the National Weather Service Forecast Office in Tulsa, Oklahoma