At an occluded front, the cold air mass from the cold front meets the cool air that was ahead of the warm front. The warm air rises as these air masses come together. Occluded fronts usually form around areas of low atmospheric pressure.

On a weather map, like the one on the left, an occluded front looks like a purple line with half triangles and half semicircles along it pointing in the direction that the front is moving. It ends at a low pressure area shown with a large L on the map, and at the other end connects to cold and warm fronts. 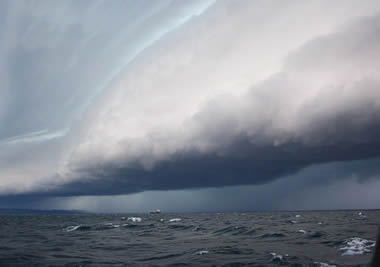 A supercell thunderstorm is a huge rotating thunderstorm. It can last for several hours as a single entity. These storms are the most likely to produce long-lasting tornadoes and baseball-sized hail. Tornadoes...more