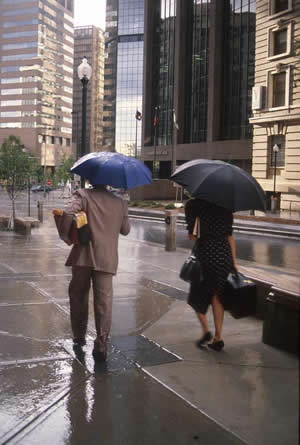 Urban areas can help make clouds and rain fall within or downwind of the city.
Click on image for full size
Courtesy of the University Corporation for Atmospheric Research

Cities can affect the weather. Looking at satellite data, scientists have observed that heavy rainfall often occurs around cities. They have several different hypotheses that may explain how cities influence weather.

One hypothesis is that the urban heat island effect starts air moving in a way that eventually leads to rain. The urban heat island effect can cause air temperatures to climb higher in a city than in the surrounding area. Air is unstable when it is warmer than the air that surrounds it and it starts to rise. The rising air cools as it rises, which allows water vapor within it to condense and form clouds. If the warm, rising air was carrying enough water vapor, those clouds can grow into storm clouds.

Another hypothesis is that when wind hits the skyscrapers and other tall buildings in a city it is pushed up higher in the atmosphere. This rising, unstable air cools, causing its water vapor to condense, forming clouds, which can lead to rain.

Tall buildings might have another effect on the wind which leads to clouds and rain too. As wind approaches the buildings, it may be divided with some of it going around one side of the city and some of it around the other side. Past the city, the wind comes back together. It collides, causing unstable air to rise, cool, release water vapor and form clouds.

Air pollution in cities may also affect cloud formation and rain. Water vapor condenses upon tiny particles in the air pollution called aerosols, forming the droplets that make a cloud. The aerosols in air pollution are often smaller than natural aerosols. This allows water to form many tiny droplets instead of fewer, larger drops. In some cases, skies are cloudy but less rain falls because the droplets are small. In other cases, pollution aerosols may cause more rain.