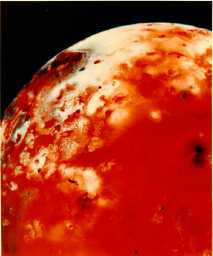 The moon Io is one of the only ones that has an atmosphere. But the environment of Io stills seems pretty unfriendly toward life as we know it on earth.

Io is very small, so there is not much gravity. For this reason, the air which comes out of Io's volcanos always drifts away. When the volcano's stop erupting, Io has no more atmosphere.

All together these things add up to a very unfriendly environment for life as we know it on earth.