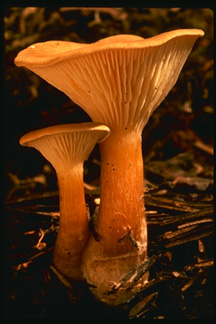 Although many fungi may look like plants, they are more closely related to animals. Fungi are not able to make their own food like plants can, so they must get their nourishment from other sources. Many fungi get their nutrients directly from the soil. Others feed on dead plants and animals. Some fungi even feed on living organisms. Athlete's foot is a common fungus which feeds on a living thing - it eats bits of skin from your toes!

The mushrooms we can buy at the supermarket are an example of a fungus that you can eat. However, those mushrooms are just a tiny bit of the whole fungus. The rest of the fungus (and the biggest part) lives below the ground where we cannot see it.

Fungi come in a wide variety of sizes and forms and many have very important uses to humans. Yeasts are very tiny fungi that we use to bake bread. And did you know that many medicines are produced with the help of fungi? If you've ever taken Penicillin to help you get over an infection, you can thank a fungus! The green mold that grows on bread that's been left out too long is a close relative of that very important medicine.

A group of scientists recently conducted a study in a forest near Fairbanks, Alaska to learn more about forests and climate change and global warming. Plants, animals, and fungi are all part of the carbon...more