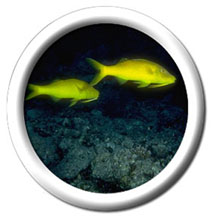 These Yellow-lined Goatfish can change colors if they need to.
Click on image for full size
Windows Original, adapted from Corel Photography

The Mullidae family is more commonly known as the Goatfish. These fish have the unique ability to change colors! They find their homes in coral reefs, sand or seagrass. The Goatfish range in size from 12 to 20 inches, and are usually thick and short.

Some Goatfish hide during the day and feast at night. There are some exceptions, such as the Yellow-lined Goatfish. They are much braver than their cousins, and search for food in daylight. This is why they can change color. The Yellow-lined species will turn white while searching for food in the sand.

Goatfish also have something called barbels. A barbel is a long tissue that hangs from a Goatfish's chin. They use the barbels to find invertebrates that are hiding in the sand. Molluscs and crustaceans seem to be the food of choice for most goatfish.