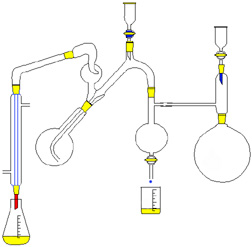 In the 1950's, biochemists Stanley Miller and Harold Urey, conducted an experiment which showed that some of the building blocks of life like amino acids, could be formed by imitating Earth's early atmosphere.

They designed a tube which held a mix of gases similar to those found in Earth's early atmosphere along with a pool of water to imitate the early ocean, and delivered an electric current into the tube to imitate lightning. They found that several organic amino acids (long and complex molecules) had formed suddenly out of the combination of these simple elements. These molecules collected together in the pool of water to form coacervates.

Their experiments lent support to the theory that the first life forms arose through naturally-occuring chemical reactions. However, many scientists remain unconvinced.