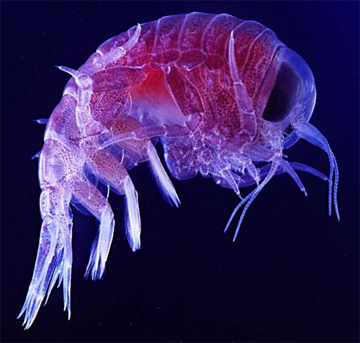 Plankton are a diverse set of marine organisms. They can live in salt and fresh water. Although some forms are able to move independently, most plankton drift with the water currents. This is actually the main way of defining plankton  they are drifters, and cannot actively swim against the current. Plankton are usually divided into three groups:

Phytoplanktonthese are photosynthetic autotrophs (that is they can feed themselves using light from the Sun). They are typically single-celled organisms and can have a nucleus or not. They live in water that is shallow enough for sunlight to shine through. Phytoplankton are responsible for producing a lot of the worlds oxygen, and they serve as food for many other organisms. Phytoplankton are considered the foundation of most of the worlds marine food chains.

Zooplanktonthis is a broad group of heterotrophic organisms (that is they depend on other organisms for food). The zooplankton range in size from single-celled creatures to larger animals like jellyfish, mollusks, and crustaceans. They feed on other forms of plankton and on organic wastes in the water.

Bacterioplanktonthis group is composed of the bacteria that drift in open water. They can be autotrophic or heterotrophic. They play a large role in important geochemical cycles, like the nitrogen and carbon cycles. In this way, bacterioplankton are often thought to serve as the oceans recyclers.

Crabs aren't the only crustaceans in the sea! Barnacles are small, rounded animals generally found on rocky reefs or shores. They are also seen attached to boats. Barnacles have a hard shell, and use...more

Scientists have found and described approximately 1.75 million species on Earth. Plus, new species are being discovered every day. From tiny bacteria to yeasts to starfish to blue whales, life's diversity...more

Carbon is an element. It is part of oceans, air, rocks, soil and all living things. Carbon doesnt stay in one place. It is always on the move! Carbon moves from the atmosphere to plants. In the atmosphere,...more