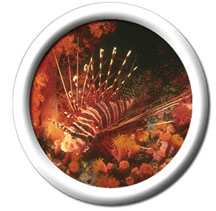 This lionfish is not only weird, but also dangerous. There are stingers on its tentacles.
Click on image for full size
Windows Original, adapted from Corel Photography

One of the reasons there are so many divers is the number of strange animals there are to observe. There are thousands of species of fish in the sea, and several of them are very peculiar. Many of them had to adapt to survive, and so they are very unconventional.

The Tasmanian Blenny has an unusual set of 'horns' on its head! This fish is usually 5 inches in length, so it needs to protect itself from predators. The two pieces of tissue protruding from its head gives the look of a fighter.

The strange-looking Globefish fills itself with water and air when threatened. It turns into an oversized golf ball, with long sharp needles sticking out all around. It is just shy of 1 foot in length, and feeds on molluscs and echinoderms.

The strong and fierce sailfish roams the open ocean searching for prey. The sailfish uses its long bill to injure smaller fish before scooping them up in its mouth. Sailfish reach about 10 feet in length, and are very popular with fishermen.

There are many more 'weird' fish in the sea, including some that have light bulbs that light the way, and others that have tentacles filled with poison. The image shows a lionfish, which has many tentacles for protection.