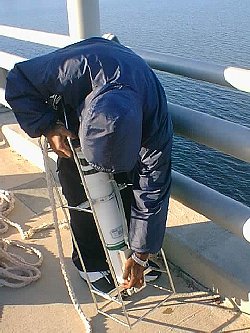 One way to measure how much dissolved salt is in water is to look at the concentration of salt in the water. Concentration is the amount (by weight) of salt in water and can be expressed in parts per million (ppm). Here are the classes of water:

Ocean water is about 3.5% salt. That means that if the oceans dried up completely, enough salt would be left behind to build a 180-mile-tall, one- mile-thick wall around the equator. About 90 percent of that salt would be sodium chloride, or ordinary table salt. What other dissolved salts are found in ocean water? The major dissolved salts of the ocean are listed in the following table: