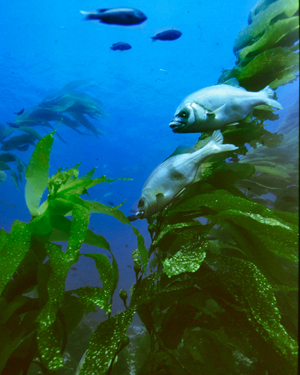 There are many different types of living things that call the ocean home. The smallest creatures are so tiny that they can only be seen with a microscope. The largest creatures are blue whales, which can be as long as three school buses.

There are many different ways to live in the ocean, too. Some animals travel through the water. Others stay in the same place on the ocean floor for their entire lives. Some dig beneath the sand. Others float near the surface.

The ocean is not the same everywhere.  The temperature of ocean water, the amount of sunlight, and the amount of nutrients change from place to place.  Different creatures can live with different conditions.

Almost all marine life lives in the top layer of the ocean where sunlight shines through. Living things like plants make their own food using sunlight through the process of photosynthesis. They are the start of most food chains in the ocean.

The links below describe four different environments in the ocean that living things call home.

The intertidal zone is the area along a coast that is underwater at high tide and above the water at low tide. Creatures that live in the upper part of the intertidal zone are only covered with water during...more

Scientists discovered two fossil whales in 2000 and 2004 in Pakistan. They dug up the fossils, transported them back to labs, cleaned off the fossils and then worked on the fossils for a few years. Their...more