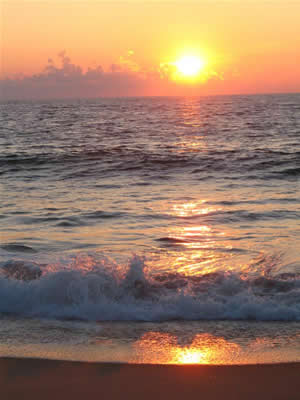 Seawater is salty. Anyone who has taken a gulp of water while swimming in the ocean knows that. The saltiness of the water is called salinity. The chemistry of the seawater includes more than salt. It depends on what become dissolved in it over time.

Ocean water is always moving. It moves around surface ocean currents in the upper 400 meters of the ocean. Water moves around the ocean by upwelling, a process that brings water from the deep ocean to shallow areas, as well as downwelling, a process that sends water from the surface to the deep ocean. Currents along coastlines move water as well as sand. Moving water transports heat from the Sun around the planet, which has an effect on climate. Complex climate models called coupled ocean-atmosphere models take into account both the atmosphere and the ocean to describe the Earth.

Each day ocean water moves with the tides, shifting where the water meets the shore in an endless cycle. Tidal cycles are perhaps most easy to see at estuaries. The ocean's tides are one type of tide created by gravitational force.

The height of the ocean surface is called sea level. Over a long time, sea level can change for a number of reasons. Today sea level is rising rapidly as Earth’s climate warms.