Motions of the Oceans

Ocean waves are usually formed by wind. Friction between wind and water causes the water to ripple. The ripples become large waves if the wind is strong, if it blows over a large distance, and if it blows for a long time.

Waves may look somewhat chaotic when they approach a beach crashing and full of sea foam. However, waves do have organization to them, especially in open water when they are not crashing.

The time it takes for waves to pass is called the wave period. It can be measured by counting the seconds it takes for two crests or troughs to pass by. A wave buoy measures aspects of waves as they go by. Wave characteristics can also be estimated visually.

Not all waves coming into a coast are the same size. Some are larger than average and others are smaller than average. About once every hour a wave comes by that is about double the size of the others. There are also unusually large waves too, although these are very rare. Highly peculiar waves called rogue waves are extremely large, often travel alone, and often not in the direction of the other waves. They are so powerful that they can cause boats to flip over and break apart. A tsunami is also a powerful wave. Unlike other waves, it is not caused by wind and has such a long wavelength that it is not visible until it gets near shore.

Waves that travel very long distances  far from the winds that formed them  are called swells. Swells tend to be large waves with flatter crests and are very regular in shape and size.

When over deep water, the energy in a wave moves forward, but the water does not. The water moves up and down in circles. As waves move into shallow water, they act differently. The energy in the wave runs into the shallow seafloor. This causes the wave to steepen and eventually to topple over or break. 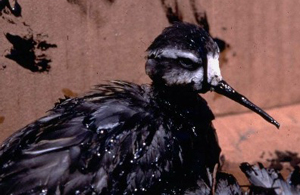 If you've ever been to the ocean, you know that ocean water contains salt. But did you know that air also has salt in it? Many types of tiny particles waft around in our atmosphere. Scientists call these...more