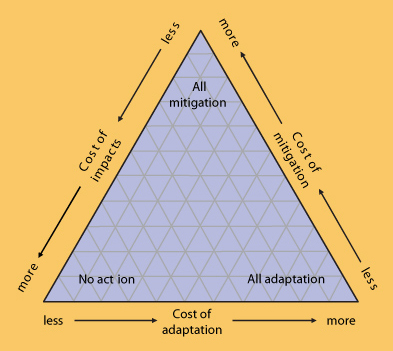 Triangle diagram from the IPCC Forth Assessment Report (chapter 18) describing the relationship between adaptation, mitigation, and inaction.
Courtesy of the IPCC AR4

Adaptation involves developing ways to protect people and places by reducing their vulnerability to climate impacts. For example, to protect against sea level rise and increased flooding, communities might build seawalls or relocate buildings to higher ground.

Mitigation involves attempts to slow the process of global climate change, usually by lowering the level of greenhouse gases in the atmosphere. Planting trees that absorb CO2 from the air and store it is an example of one such strategy.

Of course there is a third option  doing nothing.

This triangle diagram, from the IPCC Forth Assessment Report (chapter 18) sums the options up well. The corners of the triangle represent 100% of each of these three options. Areas in the middle of the triangle represent a combination of approaches. There are costs associated with mitigation and adaptation. However, notice that with no action, we are facing a high cost associated with climate impacts because we will be ill-prepared to deal with impacts.