Adaptation: making adjustments that might ultimately enhance resilience or reduce vulnerability to changes in climate.

Humans have a long history of making changes in the way they live to survive environmental changes. We are pretty industrious. These changes are the process of adaptation. Adaptation of human societies to climate change is taking place, but on a limited basis. However, current global climate change poses some new challenges to adaptation.

Adaptation happens in a variety of ways. Some adaptations are fueled by changes in government policies (see this weeks reading Floating Houses). Other adaptations occur because of technological advances (new seawall construction methods that better protect low-lying coastal areas). And there are, of course, ways that we individually adapt (insulating the attic to keep cool during summer heat waves or raising and reinforcing a house in a hurricane-prone area).

In many places in the world, the impacts of climate change can not be easily observed. Yet many of these places are making changes that will hopefully reduce their vulnerability to climate change. Advances in climate modeling have provided scenarios of future impacts, which are likely driving some of these efforts.

However, the ability to adapt is not equal between all people, states the IPCC Forth Assessment Report (Working Group II). For example, developing nations that are already dealing with the stresses of violent conflicts or high HIV/AIDS rates are not as able to adapt to climate change. This is especially problematic in places like southern Africa where the impacts of climate change on drought conditions are expected to become increasingly severe.

There are limits to how much we can adapt. There are often technological and financial limits that prevent the scale of adaptation that we would need. And often people are unwilling to change their behaviors.

Currently, adaptations are being made. The table below, from the IPCC Forth Assessment Report (chapter 17), gives examples of adaptation initiatives by region, undertaken relative to present climate risks, including conditions associated with climate change. 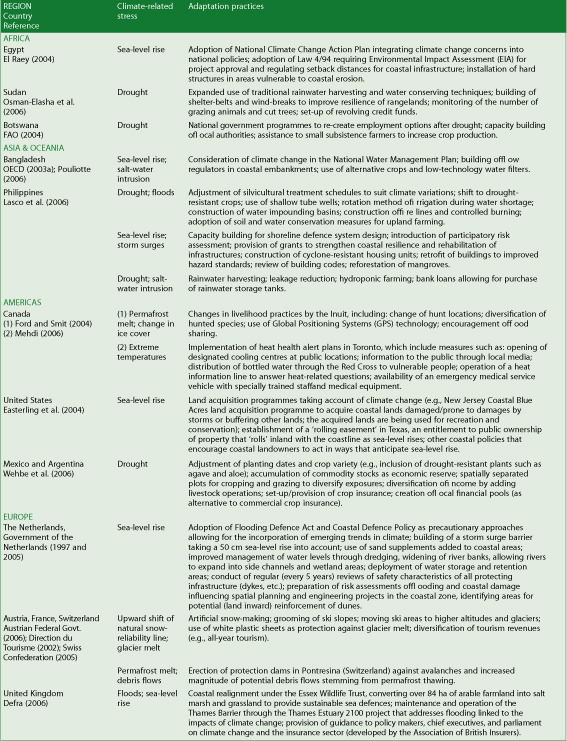