This map shows the eight biomes of the world. The orange area is tundra, purple is taiga, green is grassland, black is temperate forest, yellow is desert, blue is tropical rain forest, brown is chaparral and the white is ocean.
Click on image for full size
Windows to the Universe original image

The most sunlight is received at the equator of our planet, and consequently, temperatures at the low latitudes near the equator are warm. The types of ecosystems that develop in this warm environment are: 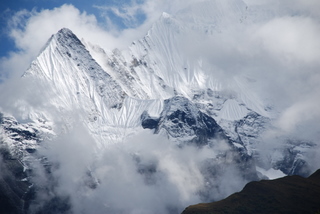 Our Trek From Kathmandu to Humde

Hi, this is Brad writing from Humde, Nepal on the 14th of September. We left Kathmandu five days ago, and it has been a busy five days! From Kathmandu we drove north to the town of Besi Sahar, and from...more