Case Study: Looking to the Past to Understand Natural Climatic Forcings with NCAR Scientist Caspar Ammann

Why Is it Important to Understand Natural Forcings Like Volcanic Eruptions?

In global climate model outputs for the 20th century, we see that a combination of anthropogenic and natural forcings most accurately describe the condition of the Earth's climate system. Natural forcings, including volcanic eruptions and solar fluctuations, can not account for recent warming during the 20th century. Those who argue that humans are not responsible for recent global warming often cite that natural forcings must be the cause. And if models do not agree, then we just don't understand the natural forcings well enough. If we did, they argue, then we would find that they are responsible for all warming.

There Were Climate Variations Before Humans Started Influencing the System. Example: The Medieval Warm Period and The Little Ice Age 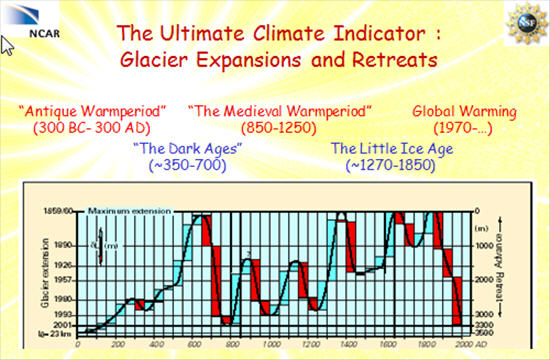 Where: Europe, possibly worldwide but Southern Africa and Antarctic Peninsula were relatively warm 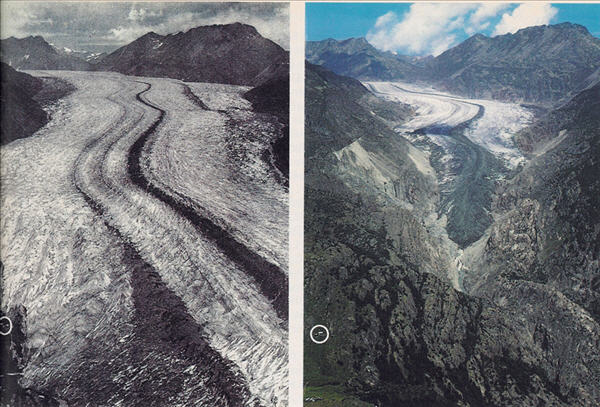 The Great Aletsch Glacier (Grosser Aletschgletscher) in Switzerland, photographed from approximately the same location in 1856 (left) and 1987 (right). Notice the hut circled in the lower left.
Credits: Courtesy Caspar Amman

What Caused the Climate Variations of the Medieval Warm Period and the Little Ice Age, Prior to Anthropogenic Influence? Sunspot and Carbon-14 data compared to winter severity in London and Paris from 1100 to 1900 CE.
Credits: Courtesy Caspar Amman

Volcanic eruptions punctuated the changes brought on by solar variability. Examples of historic eruptions and their effects are provided below. 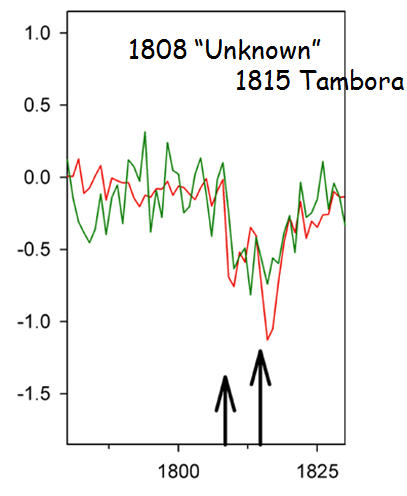 Two computer models (redline is NCAR's CSM) reflect the drop in temperature due to two volcanic eruptions, one in 1808 and the other in 1815.
Credits: Courtesy Caspar Ammann

Within two weeks of the eruption of Krakatau in the Pacific Ocean, clouds of sulfate aerosol had circled the Earth, affecting sunsets for more than two years! The Sun appeared blue-green in color through the haze. The eruption had generated 30-70 metric tons of sulfate aerosols in the stratosphere. Krakatau was the loudest volcanic explosion in recorded history. The explosion was heard at a distance of 4653 km from the volcano and created a 6km-wide crater as it ejected more than 10 cubic kilometers of rock and 20 cubic kilometers of tephra 35 to 50 kilometers vertically into the atmosphere.

What We Know About Natural Forcings in Climate Models

Using the same approach to force the global climate model with solar and volcanic forcing, we can simulate the climate of the last Millennium relatively well. Thus, it is unlikely that we underestimate solar forcing in the 20th century. According to the models, a combination of solar variability and volcanic eruptions can explain much of the climate change during the Medieval Warm Period and Little Ice Age. The same models can not explain recent global warming solely by solar variability and volcanic eruptions. Thus, there must be another factor forcing the climate system though the last 150 years. In fact, models can accurately describe most recent climate variability when anthropogenic forcing is included with solar and volcanic forcing.

The figure below is often used by NCAR scientists to explain our understanding of how both natural and anthropogenic forcings must be used to account for the observed changes in global temperatures during the last century.

The blue line represents the mean temperatures derived from an ensemble of NCAR global climate model experiments that focused on our understanding the known natural forcings, such as solar variability and volcanism. The light blue area represents the variability in the individual model runs. If, as some critics claim, natural forcings are the sole cause of global warming, the blue line should follow the black line. This is obviously not the case past about 1980, therefore natural forcings cannot responsible for the observed changes since then.

The red line represents the predicted mean temperature derived when the models were adjusted to include both natural and anthropogenic forcings, such as greenhouse gases and aerosols. The light red area indicated the variability in these model runs. It is clear that the results that include anthropogenic forcings more closely match the observations and thus indicate that we are responsible for global warming.