Changes in the rate that rocks are made and destroyed can have a profound affect on the planet. The following overview describes how the rock cycle is affected when the rate of plate tectonic movements changes over geologic time scales.

The planet has been cooling slowly since it formed. The graph to the right shows the cooling of the mantle and core over the past 4.6 billion years of Earth history. This cooling has been at a relatively constant rate aside from a more rapid drop in temperature early in Earth's history. However, there have also been shorter term changes in the rates of tectonic activity or plate movements. Moving plates cause sea floor spreading, volcanic eruptions, and plate subduction. These processes rely on the convection in Earth's mantle to move the plates.

Changing the rate of plate tectonic movements causes changes in the production and destruction of all three rock types. Igneous rocks: The rate of plate movements is directly related to the rate of igneous rock production. The most common igneous rock type is basalt and it makes up the bulk of oceanic plates. Basalt is formed at divergent plate boundaries the rate of sea floor spreading and, consequently, volcanism. 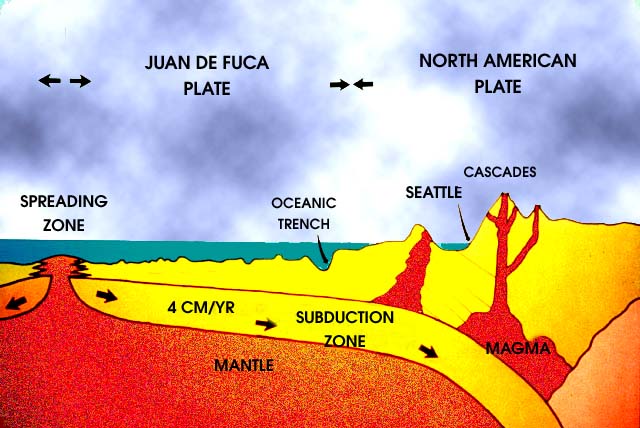 This is a drawing of seafloor spreading.
Credits: Image copyright 1997 by the American Geophysical Union. Further electronic distribution is not allowed.

Sedimentary rocks: The amount of weathering and erosion of rocks is in part controlled by uplift. Uplift occurs when areas of the crust move up due to plate tectonic movements. Rocks will be more likely to erode if they have been uplifted and are essentially unstable and out of balance with the surroundings. The amount of deposition of sediments is controlled by the depth of basins. Sediments will not deposit if there is no room for them! The depth of basins is partially controlled by subsidence (when areas of the crust move down). More subsidence means that there is more room for sediments to deposit and thus for sedimentary rocks to form. 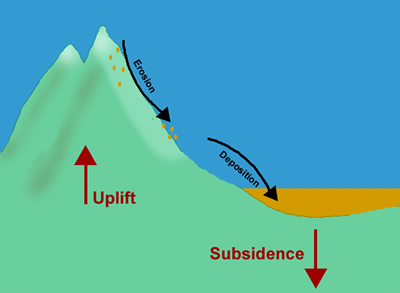 Credits: The Windows to the Universe Team (Lisa Gardiner)