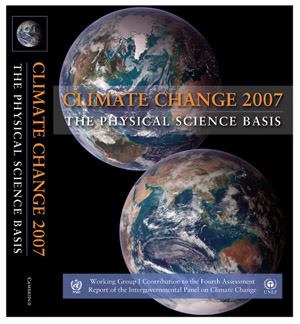 The Intergovernmental Panel on Climate Change (IPCC) is an international organization that includes scientists and government representatives from around the world. While the IPCC includes hundreds of climate scientists, the organization doesn't do research. Instead, every few years, the IPCC makes a survey of our current understanding of climate change, its risks, its impacts, and strategies for mitigation and adaptation based on the latest scientific literature. The IPCC was established in 1988 by the World Meteorological Organization (WMO) and the United Nations Environment Programme (UNEP).

Each of volumes of the AR4 includes a rather lengthy full report as well as a briefer "Summary for Policymakers". These summaries are written in language that is much more accessible to non-scientists and are much briefer than the full reports. While they are intended for policymakers, they are also very useful for educators and the general public. For more information, explore the links at the end of this reading.

An IPCC Resource for Educators and the Public

For their 2007 AR4 report, IPCC Working Group I scientists worked with a science writer to put together the answers to frequently asked questions about climate science and climate change. The questions range from basics about how Earth's climate works such as "What factors determine Earth's climate?" and "What is the greenhouse effect?" to questions about the impacts of warming such as "Is sea level rising?" and "Are droughts expected to change as Earth's climate changes?" Also of particular value to educators teaching climate science to the general public are the answers to questions often asked by people who are skeptical of global warming such as "Is the current climate unusual compared to earlier changes in Earth's history?" and "Can the warming of the 20th Century be explained by natural variability?". This document is a gold mine for educators wishing to understand and explain climate science to the public and students. Look at the questions and answers online by following the link below:

All Must Agree at the IPCC

One interesting aspect of the process by which the IPCC develops its recommendations and reports is that its proclamations are arrived at by consensus. Thousands of people from around the globe either contributed to or reviewed portions of the IPCC's Fourth Assessment Report; somewhere between 300 and 350 representatives of governments and scientific organizations participated in the meeting at which details of the report were finalized. Essentially, all language included in the reports had to have the support of all representatives before it was included in the final release. As you can imagine, getting such a large and diverse group to agree on anything is a monumental challenge. There are strengths and weaknesses to this approach. Some participants feel that the reports are somewhat "watered down"; that any claim that was even remotely contentious in the eyes of any participant was vetoed, and hence some important and largely agreed-upon aspects of the science were left out. On the other hand, the consensus process does make it very difficult for naysayers to claim that the IPCC's reports are merely the ranting of a handful of extremists.

For more information about IPCC Summaries for Policymakers