Making Models of the Climate System

What Is a Climate Model? 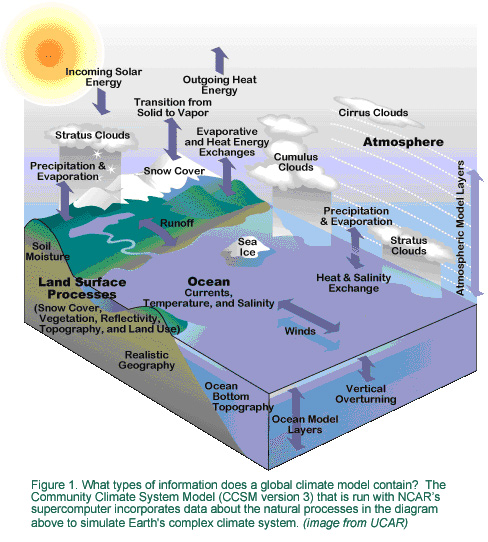 Global climate models (GCMs) use mathematical equations to describe the behavior of factors that impact climate. These factors include dynamics of the atmosphere, oceans, land surface, living things, sea ice, and energy from the Sun. Thousands of climate researchers use global climate models to better understand the long-term effects of global changes such as increasing greenhouses gasses or decreasing Arctic sea ice. The models are used to simulate conditions over hundreds of years, so that we can predict how our planet's climate will likely change.

There are various types of climate models. Some are based specifically on certain components that affect climate such as the atmosphere or the oceans.

There are currently several other complex global climate models that are used to predict future climatic change. The most robust models are compared by the IPCC (Intergovernmental Panel on Climate Change) as they summarize predictions about future climate change.

In a global climate model (GCM), hundreds of mathematical equations, which describe Earth processes and how Earth processes are interrelated, are processed using supercomputers. Usually this is done in order to make climate predictions for one or more centuries into the future; sometimes models are used to examine past climates too. The GCMs represent natural processes via mathematical equations in a three-dimensional grid that covers the surface of the modeled Earth and extends upward in layers through the modeled atmosphere. At every intersection in the model's grid the model calculates the atmospheric processes that are going on through the timeframe of the model's run. Small processes that happen between a model's grid points cannot be seen in the model results, but they can be accounted for in other ways. Some models have wide spacing in the grid and, thus, fewer points where the model calculates. These run faster and are useful when less detail is needed. Some models have very closely spaced grid points. These produce much more detailed simulations and require more computing time.

Some uncertainty about future climate predictions based on models is due to uncertainties in the model. There are processes and feedbacks between different parts of the Earth that are not fully understood and are areas of active research. For example, the effects of clouds on climate is known to be a significant, however researchers are actively trying to better understand the effect of clouds to ensure that climate models accurately portray this part of the Earth system. Researchers work to ensure that natural processes are represented in climate models as accurately as possible, so that models can be used to make predictions of future climate that are as accurate as possible. However, the majority of the uncertainty in these climate predictions is not related to natural processes. Instead, it is uncertain how much pollution humans will be adding to the atmosphere in the future. Innovations that stop or limit the amount of greenhouses gasses that are produced, legislation that changes the amount of pollutants that are released, and how the growing human population lives in the future are all at least somewhat unknown. To address this, climate models are often run through various scenarios, each addressing pollution and development by humans in a different way. According to the IPCC, the majority of climatologists agree that climate models do not perfectly represent climate processes. There is always some error in models. However, these climatologists don't think that better models would change the conclusion that Earths average temperature is warming.