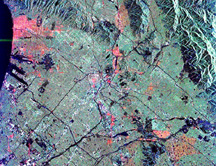 Scientists have discovered that downtown and West Los Angeles appear to be moving about one-fifth of an inch per year toward the San Gabriel Mountains. The measurements were made using the Southern California...more