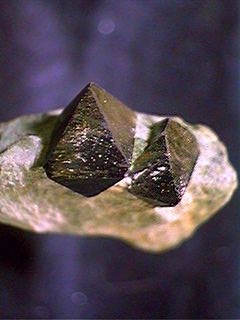 The black crystals in this picture are a magnetic mineral called magnetite!
Click on image for full size
Corel

Magnetite is a natural magnet! Part of a mineral group called the oxides, magnetite can usually be identified by its strong magnetism and dark color.

Black sand grains at beaches and elsewhere are often made of magnetite. If you find a beach that has black sand, try running a magnet over the surface and see whether the little black sand grains stick to it. Over time, those sand grains may cement together forming a sedimentary rock.

Why is magnetite so magnetic?

Any magnetic field is caused by a flow of negatively charged particles called electrons. In magnetite, electrons flow between two different types of iron that have different changes, to even out the changes. This flow of electrons within magnetite generates the magnetic field.