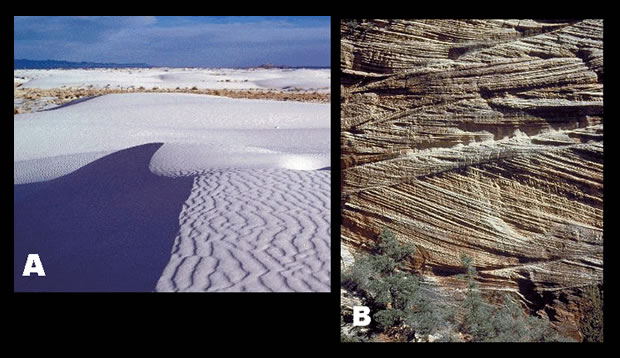 The sand dunes in White Sands National Monument, NM shown in (A) may someday be preserved in sandstone, a sedimentary rock made of sand, like that shown in (B). Sand dunes move over time as the little sand grains bounce up one side of the dune by the wind and then slide down the other side of the dune. The slide sides of dunes (called the lee sides) can be preserved in rock like in (B) where a canyon wall shows that millions of years ago sand dunes were a part of this landscape. If, over millions of years, you made a sand dune into solid rock and then cut it in half, it would look like the rock in (B). The little tilted layers of sandstone are from the lee sides of dunes. Most of them are tilted down to the right indicating that the dunes moved towards the right. A break in the rock layers (usually tilting down to the left) separates different dunes that moved over each other.