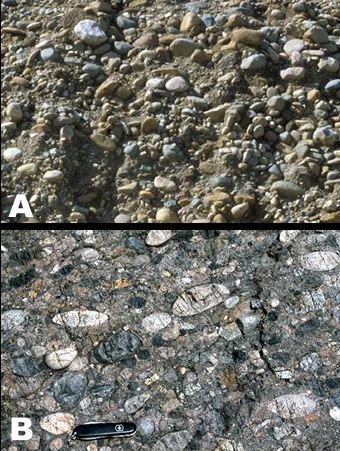 Loose sediment, like that shown in (A) may someday become a rock like the one in (B) if compacted and cement fills the spaces between clasts.
Click on image for full size
(A) courtesy of Bruce Molnia, Terra and (B) courtesy of Martin Miller, University of Oregon

Step 4: Lithification (From Pile of Sand to Solid Rock)

Sediment that has formed, been transported, and deposited, is not a sedimentary rock unless it is all bound together. The process of sediment becoming a rock is called lithification. It can take tens to hundreds of thousands of years.

Compaction also helps a pile of sediment to become a sedimentary rock. Compaction occurs when a layer of sediment is buried under other, younger layers of sediment, the clasts become squished closely together, filling in some of the porosity, the empty space between clasts.