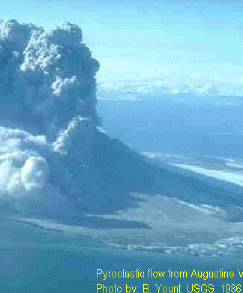 Mt. Pelee is not a very tall volcano, in fact it is an example of what is called a "lava dome".

An extremely destructive eruption of Mount Pelee occurred in 1902. The coastal town of St. Pierre, about 4 miles downslope to the south, was demolished and nearly 30,000 inhabitants were killed almost instantly by a pyroclastic flow which swept down the mountain. Such a flow is illustrated in this picture of an Alaskan volcano.

The cloud of hot ash and gases swept into town at an estimated speed of 100 miles per hour or more. It would only have been 5 minutes for the pyroclastic flow to sweep from the volcano's summit into town.

Earths center, or core, is very hot, about 9000 degrees F. This heat causes molten rock deep within the mantle layer to move. Warm material rises, cools, and eventually sinks down. As the cool material...more

Many kinds of surface features provide evidence of a sliding lithosphere. When two plates move apart, rising material from the mantle pushes the lithosphere aside. Two types of features can form when...more