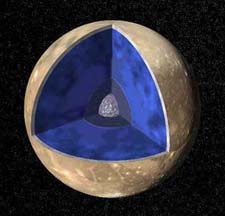 Return to the Moon

The picture shows the moon's crust, about 60=150 km thick, followed by the lithosphere, shown in blue. The moon's lithosphere is the major portion of the interior, about 1000 km thick. The moon's core may be comprised of two zones, a "soft" partially molten zone and a solid iron zone, as shown in the picture. Moonquakes, as measured by instruments left behind by the Apollo astronauts, seem to take place between the outer core and the lithosphere.

The Moon's crust is a composed of a dusty outer rock layer called a regolith. The term regolith refers to a rocky layer resembling concrete, which has been broken and blasted apart, then fused back together somehow. Like the Earth's crust, the Moon's crust seems to contain some magnetism. Both the crust and regolith of the Moon are unevenly distributed over the entire Moon. The crust ranges from 38 miles (60 km) on the near side to 63 miles (100 km) on the far side. The regolith varies from 10 to16 feet (3 to 5 meters) in the maria to 33 to 66 feet (10 to 20 meters) in the highlands.

The Lunar Prospector Mission expects to explore more about the crust of the Moon. The Gravity Experiment onboard the spacecraft will explore uneveness within the crust and permit a more accurate calculation the density of the lunar core. This is important information for designing better future lunar missions.

The Earth's Crust, Lithosphere and Asthenosphere

The crust is the upper layer of the Earth. Under the oceans it is only about 5 km thick while under the continents it can be up to 65 km thick. The plates that fit like puzzle pieces around the Earth...more

The North and South Pole of the Moon are interesting places. Some areas near the Moon's poles are almost always in sunlight. Other places near the poles are always in dark shadows. Earth is tilted on its...more

Clouds are the pretty white fluffs you see in the sky. They are made up of tiny water drops. Sometimes, if the wind is fast enough, you can even watch the clouds move. Clouds can come in all sizes and...more

One in a while, a tropical thunderstorm grows and grows, becoming a giant hurricane. First the storm grows a little bit. It combines with other thunderstorms and they all spin around an area of low pressure....more