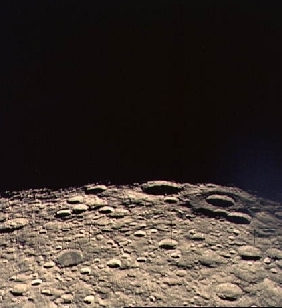 Scientists have studied the ages of rocks in cratered regions and have determined the rate of cratering at various epochs in the Moon's past. By studying the light-colored highlands, they found that there was a period of heavy bombardment very early in the Moon's history, from about 4.6 to 3.8 billion years ago. After that, the rate dropped off substantially and much less cratering has occurred since then.

Rock samples from large impact basins show that about 3.1 to 3.8 billion years ago several asteroid-size objects impacted the Moon, just as the period of heavy bombardment was ending. This was shortly followed by lava flows which filled in the basins and formed the dark maria. This explains why craters are relatively few and isolated on the dark maria, but dense and overlapping in the highlands. No lava flows occurred on the highlands to erase the original blanket of craters from the time when the Moon's surface was showered with the debris of the early solar system.