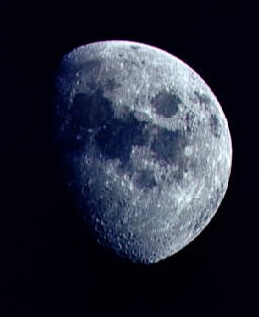 Frequently Asked Questions about the Moon

Nicknames for the Full Moon

An Article about the Findings from the Apollo Program

The Earth's one natural satellite, the Moon, is more than one quarter the size of Earth itself (3,474 km diameter), making the Earth-Moon system virtually a double-planet. Because of its smaller size, the Moon's gravity is one-sixth of the Earth's gravity, as we saw demonstrated by the gigantic leaps of the Apollo astronauts.

While there are only two basic types of regions on the Moon's surface, there are many interesting surface features such as craters, mountain ranges, rilles, and lava plains. The structure of the Moon's interior is more difficult to study. The Moon's crust, the top layer, is a rocky solid. Below the crust is the mantle which consists of a denser rock. Together, the crust and mantle form the Moon's lithosphere, which is very thick (perhaps 800 km) compared to the Earth's lithosphere. Beneath the lithosphere is a partially molten zone. Although it is not known for certain, many lunar geologists believe the Moon may have a small iron core, even though the Moon has no measurable magnetic field. By studying the Moon's surface and interior, geologists can learn about the Moon's geological history and its formation.

The Moon doesn't produce its own light, but looks bright because it reflects light from the Sun. Think of the Sun as a light bulb, and the Moon as a mirror, reflecting light from the light bulb. The lunar phase changes as the Moon orbits the Earth and different portions of its surface are illuminated by the Sun.

Scientists have studied the ages of rocks in cratered regions and have determined the rate of cratering at various epochs in the Moon's past. By studying the light-colored highlands, they found that there...more

Phases of the Moon

The diagram shows the Earth, and the Moon in different positions along its orbit around the Earth. The Sun is off in the distance, lighting the Earth-Moon system. At any position, half of the Moon is reflecting...more

The Moon's Orbit and Rotation

The Earth's Moon is the fifth largest in the whole solar system, and is bigger than the planet Pluto. The Moon has a nearly circular orbit (e=0.05) which is tilted about 5° to the plane of the Earth's...more

The poles of Earth's Moon are interesting sites due to extremes of sunlight and darkness. Earth is tilted on its axis by 23°, which causes our seasons including the alternating "midnight Sun" and long...more

The Crust & Interior of the Moon