The continent of Antarctica in the south polar region of Earth
Click on image for a larger and more detailed map.
NASA

Antarctica is unique. It is the coldest, windiest, and driest continent on Earth. The land is barren and mostly covered with a thick sheet of ice. Antarctica is almost entirely south of the Antarctic Circle at 66.5S latitude. With 14 million sq km of land, it is roughly one and a half times the size of the United States.

About 98% of Antarctica is covered with a thick ice sheet. Ice shelves extend out over the Ross and Weddell Seas. The little exposed land that there is between the ice is very rocky. Under the ice, an area called the Bentley Subglacial Trench has the worlds lowest land elevation that is not under seawater. This area is 2,555 meters below sea level. In several places under the ice sheet, there are freshwater lakes.

Temperatures can be very low. East Antarctica is colder than West Antarctica because it has a higher elevation. The Antarctic Peninsula has the warmest climate on the continent, however high temperatures still average slightly below freezing.

The highest mountain, Vinson Massif, is 4897 meters (16,050 feet) above sea level. Vinson Massif formed as faults shifted sending blocks of the Earths crust to higher elevations. Several of the other mountains in Antarctica are active volcanoes, including those on Deception Island and in remote parts of West Antarctica.

Flying twin-engine light aircraft the equivalent of several trips around the globe and establishing a network of seismic instruments across an area the size of Texas, a U.S.-led, international team of...more 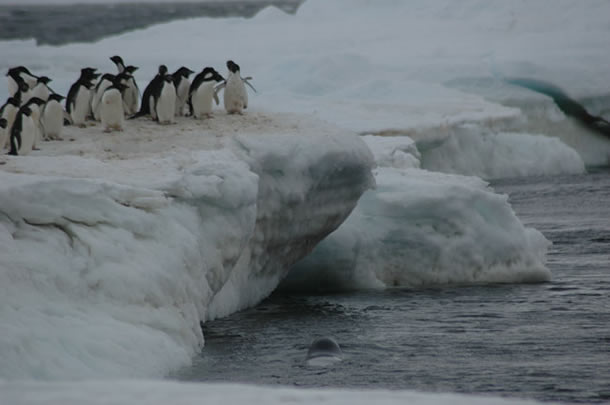 The last few days have been particularly stormy. Heavy winds have caused the sea ice to shift, break up and move out. We have been watching it from the hut and are amazed how fast it has occurred. Near...more