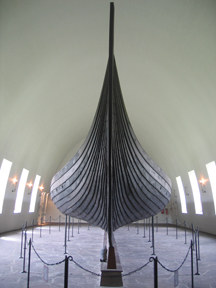 The Gokstad ship at the Viking Ship Museum in Oslo, Norway. The Gokstad ship is a late 9th century Viking ship found beneath a burial mound at Gokstad farm in Norway. It was excavated in 1880 by Nicolay Nicolaysen.
Click on image for full size
Courtesy of Wikipedia Commons. This file is licensed under the Creative Commons Attribution ShareAlike 2.5 License.

The Viking Age refers to the time period in Scandinavia between 793 AD (when Norwegian Vikings landed in England and raided the English town of Lindisfarne) and 1066 AD (when the English successfully fought off the Norwegian King Harald IIIs invasion attempt). During these 250+ years, the Vikings explored and colonized much of Europe, and parts of Asia, North Africa, the Middle East, and even North America.

Before the Viking Age, Scandinavia was settled by Germanic tribes that existed on the extreme edge of the Roman Empire, and much of the population was settled in communities near or on the coast. Although it is not clear what prompted these people to begin exploring their world, some archaeologists think it may be related to climate change.

Several different causes have been suggested for the decline of the Viking Age. The establishment of royal houses in a number of European countries and the rise of Christianity as a dominant religion are thought to have stabilized the region discouraging the Vikings somewhat raiding-oriented culture. Interestingly, the end of the Viking Age also coincides with the beginning of the Little Ice Age, which was a period of global cooling that began around 1250 and is known to have increased North Atlantic pack ice measurably. This has led some archaeologists to suggest that the European climate may have begun to change and that ended the Viking Age.

The Medieval Warm Period was a time of warm climate in Europe, the height of which was from about 950 until 1100 A.D. The warm climate overlaps with a time of high solar activity called the Medieval Maximum....more

Polar bears are one of natures ultimate survivors, able to live and thrive in one of the worlds harshest environments, but we are concerned the polar bears habitat may literally be melting said US...more