The picture above shows how the shape of a tsunami wave changes as it moves into shallower water.
Click on image for full size
NOAA

A tsunami (pronounced tsoo-NAH-mee) is a series of waves, generated in an ocean or other body of water by a disturbance such as an earthquake, landslide, volcanic eruption, or meteorite impact. Tsunamis can savagely attack coastlines, causing devastating property damage and loss of life. Some people call tsunamis "tidal waves", but these monstrously large waves really have little to do with tides, so the term "tidal wave" is not really appropriate.

Tsunami waves are different from the waves you can find rolling into the coast of a lake or ocean. Those waves are generated by wind offshore. The wavelength of regular wind-generated waves, that is the distance between the crests or highest points of the waves, might a just a few meters for small waves or about 100 meters for large waves. But a tsunami in the open ocean can have a wavelength of more than 100 km. Tsunami waves have huge wavelengths, but they are typically less than a meter high in the open ocean. A tsunami can travel over the open ocean at about 700 km/hr.

As a tsunami travels into the shallower water near the coast, it transforms. As a tsunami approaches shore, it's height increases and wavelength decreases. Therefore, even though a tsunami may be imperceptible at sea, it may grow to be several meters or more in height near the coast and have a tremendous amount of energy. When it finally reaches the coast, a tsunami may appear as a rapidly rising or falling tide or a series of waves with a maximum height of up to 30 meters above sea level.

A few minutes before a tsunami wave hits, the water near shore may recede, exposing the ocean floor. Often the first wave may not be the largest. Additional waves may arrive at the coast every 10 to 60 minutes and move much faster than a person can run. The danger from a tsunami can last for several hours after the arrival of the first wave. Unlike other waves, tsunami waves typically do not curl and break.

Coasts affected by a tsunami will be severely eroded. A tsunami can cause flooding hundreds of meters inland. The water moves with such force that it is capable of crushing homes and other buildings.

Sumatra experiences frequent seismic activity because it is located near the boundary of two of Earth's tectonic plates. Earthquakes occur at 'subduction zones,' such as the one west of Indonesia, when...more 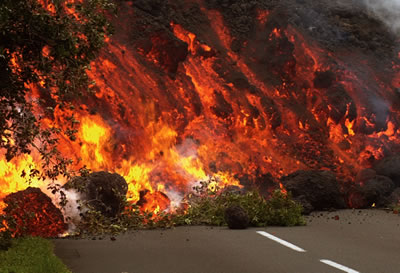