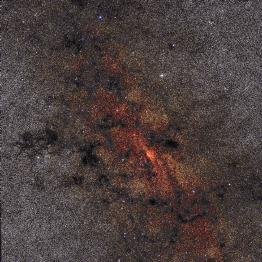 Atlas Image of the center of the Milky Way obtained as part of the Two Micron All Sky Survey (2MASS), a joint project of the University of Massachusetts and the Infrared Processing and Analysis Center/California Institute of Technology, funded by the National Aeronautics and Space Administration and the National Science Foundation.
Click on image for full size
Courtesy of Atlas Image mosaics by E. Kopan, R. Cutri, and S. Van Dyk (IPAC

Map of the Sky
News story originally written on July 17, 2000

Thanks to a couple of telescopes, everyone on the internet can browse through almost 2 million images. Stars throughout the sky were photographed by the Two-Micron All Sky Survey (2MASS) and are now available free of charge.

"Any computer with a web browser can be transformed into a desktop observatory," said Dr. Michael Skrutskie, of the University of Massachusetts, principal investigator of the sky survey. "The general public can see a menagerie of objects in infrared wavelengths that they couldn't see in any other way."

And just in case you don't think 2 million images is enough, another million will be added by 2003. Click on the link below to start browsing. Happy star hunting!