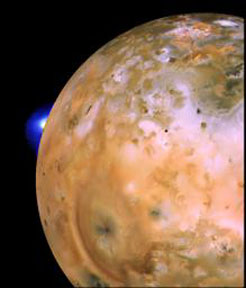 Chlorine(Cl) along with sodium(Na) makes sodium chloride(NaCl), also known as common table salt. Salt is a very important mineral. The proportion of chlorine in Io's atmosphere is billions of times larger than Earth's, making it the celestial body with the highest amount of Cl in our solar system.

"In fact, Io seems to have a higher proportion of chlorine in its atmosphere than any other object in the solar system," said CU-Boulder Associate Professor Nick Schneider. "The huge volcanoes on Io are similar to giant geysers, spewing material hundreds of miles into the atmosphere."