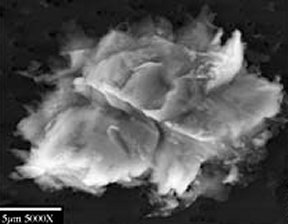 This is an example of a microbe found at the South Pole.
Click on image for full size
Courtesy of NASA

Scientists discovered something that will have a big effect on our search for life on other planets. Tiny microbes were found at the South Pole. These living organisms were thriving in the harsh antarctic conditions. If these microbes can live here, then there is a chance that similar organisms live in the cold regions of other planets, like Mars.

"If the team's conclusions prove true, the discovery not only has important implications for the search for life in other extreme environments on Earth, but also for the possibility that life -- at least at the microscopic level -- may exist elsewhere in the solar system," the National Science Foundation (NSF) said Thursday in a statement.

Scientists are amazed with the finding. Not only is it very cold at the South Pole, but large doses of harmful radiation bombards the region. Not even this ultraviolet light can keep these little creatures from surviving.

"While we expected to find some bacteria in the South Pole snow, we were surprised that they were metabolically active and synthesizing DNA and protein at local ambient temperatures of 10.4 degrees to 1.4 degrees Fahrenheit ," Edward Carpenter of the State University of New York at Stony Brook said in the statement.