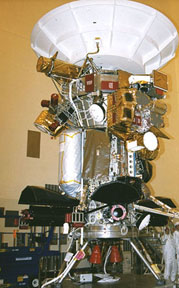 The Cassini space probe will use the Earth's gravity to increase its speed while zooming towards Saturn. NASA's most expensive unmanned spacecraft has already made a flyby of Venus during its two-year venture in space. After passing Earth, it has one more flyby of Jupiter in 2000 before reaching Saturn in 2004. NASA probes have completed several successful flybys of Earth since 1973, but this one attracts more attention than usual because the probe carries plutonium.

Plutonium is a radioactive chemical which can cause lung cancer if inhaled. The plutonium is stored as pellets in special cartons aboard Cassini, but if a malfunction occurs, the satellite could burn up in the atmosphere and disperse the harmful chemicals. Scientists say the chance of a problem occurring is less than 1 in a million. Still, the chance of disaster upsets many around the world.

I'm very much in favor of the space program, but I think the use of plutonium in space is a manifestation of organized insanity," said John Gofman, a physicist on the team that developed the atomic bomb for the United States during World War II. "All I can say is that I'll be praying for the success of the flyby."

"If you hit a hard surface like rock or concrete, there is a potential for the release of some plutonium," said Rich Furlong, a program manager at the DOE, which oversees the manufacture of NASA's plutonium canisters. "But there would not be a release if they landed in water. It just depends on the surface at impact."

Still, NASA believes the rewards are much greater than the risks. There is no way to do space exploration without some risk," said Jim Longuski, a professor of aeronautics and astronautics at Purdue University in Indiana. "The question is what is the balance between the risk and the potential payoff? In this case, I think the benefit far outweighs the miniscule risk involved."