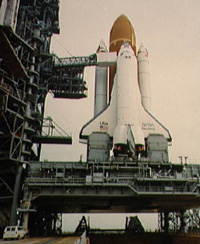 NASA launched shuttle Discovery this past Thursday. NASA was worried about bad weather causing problems with the launch. The weather ended up being fine and the launch was good.

While the shuttle is in orbit the astronauts will test a robotic arm. This arm acts like a human arm and hand. It can pick things up, move objects, and turn knobs. It is run with a computer.