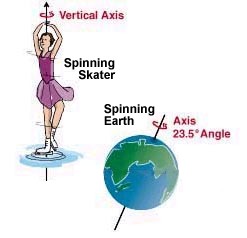 Our atmosphere changes all the time. Winds and air pressure change over days, weeks, and years. These changes affect our weather. Now scientists say that they also affect how the Earth spins around and around.

How does the air around us affect the spin of our planet? Earth is spinning like a skater spins on the ice. When a skater moves his or her arms out, there is weight far from the middle of the skaters body. This causes the skater to turn slower. The spinning Earth works in the same way! When there is high atmospheric pressure at the equator, the weight of tons of air molecules is far from the middle of the Earth. Just like the skaters arms, the air molecules cause Earth to turn more slowly.

A team of scientists figured out what was happening by comparing measurements from the atmosphere with measurements of how the Earth spins. They found that the changes to how Earth spins can even cause a small fraction of a second of change in the length of a day. (So if you feel like its been a very long day, you may be right!)