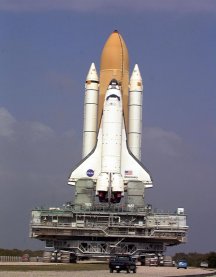 "We are in the business of launching shuttles," NASA spokesman Joel Wells said. "Although everyone at Kennedy knows that safety is first, it is good to see vehicles moving around, because that is the business that we are in."

The good news couldn't have come at a better time. The Hubble Space Telescope is now facing problems that would not have occurred if the shuttle had launched on time. The telescope has 6 gyros, which keep the spacecraft in position for measurements. Four of these gyros have malfunctioned, forcing the Hubble into safe mode. This means that it can no longer be used for observations until it is fixed.

"The telescope is in good shape, we're getting telemetry and everything else is showing good indications that the spacecraft is in good health," said Don Savage from NASA headquarters in Washington, D.C.

Although the telescope is not in any danger, scientists will lose 6 weeks of information. NASA believes that after astronauts fix the Hubble, it should be ready for use in January.

April 24, 1990, marked the beginning of the Hubble Space Telescope (HST). This powerful observatory has been the world's eyes in space, peering into the deepest parts of the Universe. NASA and the scientific...more