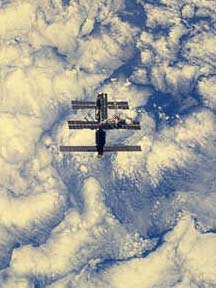 The International Space Station still isn't ready! Russia doesn't have enough money to put the service module in space. They are hoping to launch the module in July.

Russia doesn't have any rockets or boosters for the module. Someone is giving money to keep the Mir station up. So, Russia is going to use all its rockets for the Mir instead. They were going to crash the Mir into the ocean if they didn't get more money.

Keep your fingers crossed! Maybe the ISS will have the module this summer.

After 13 years of ruling space, the Mir space station will finally say good-bye. Its last crew has landed on Earth, which means the station is empty for the first time in 10 years. Next year, Russian...more